Yagi’s recent oil paintings are fueled by contemporary culture, human folly and an obsessive curiosity for the macabre. Her work is inspired by the natural sciences as well as by the classical drawing techniques of the old masters, including anatomical studies. Yagi’s recent paintings incorporate anatomical imagery to explore the human psychological condition, such as cutaway skulls portraying basic human drives and the thin veneer of humanity overlaying our animal nature.

Yagi was raised in suburban Denver Colorado, the oldest of four children. She loved science from an early age, especially biology, and drawing. Yagi’s Japanese-American parents instilled in her an ethics of getting a “useful” education. Interned during WW II, her family – like many others of that generation – valued stability and mainstream values. So, bowing to family pressure, Yagi obtained an MBA and worked in corporate world for 27 years. But she never gave up her vision of being an artist and continued to draw and paint, while holding down a full time job in finance.

She relocated for her employer and moved to Los Angeles, and then to San Francisco. The creative and eclectic climate in San Francisco is a catalyst for bringing about the current direction of her work. She left the corporate life behind for good in 2008 and became a full time artist. She now works out of her studio in the South of Market neighborhood of San Francisco.

Located in San Francisco’s historic North Beach, Modern Eden was opened by local artists, Bradley Platz and Kim Larson in June 2010. Modern Eden Gallery has quickly become one of San Francisco’s most exciting and attractive destinations for art. Modern Eden showcases talent-driven art by San Francisco’s top emerging and established artists. Modern Eden focuses on figurative and illustrative paintings in genres ranging from realism to surrealism. You can visit Modern Eden at 403 Francisco Street Wednesday through Sunday 11 am-7 pm or visit us on-line at http://www.moderneden.com. 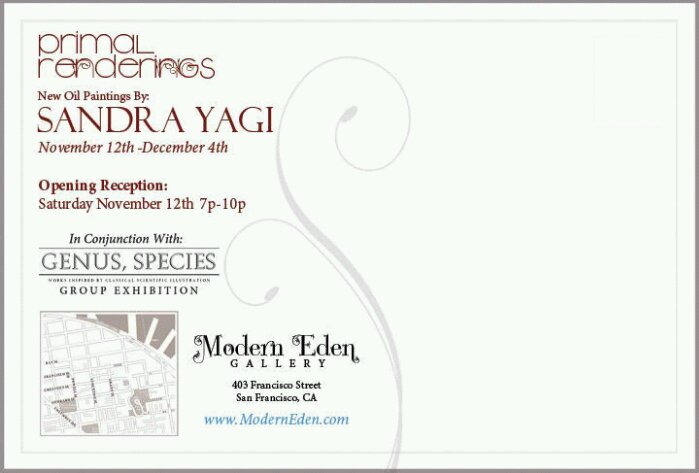